HomeArticlesAnalysis of OpenGL ES on iOS

Analysis of OpenGL ES on iOS

What is OpenGL ES

OpenGL ES ( Open Graphics Library for Embedded Systems ) is a subset of the OpenGL , which is mainly designed for Embedded Systems.It is a cross language and a multiplatform API for rendering 2D and 3D vector graphics. The API is typically used to interact with a graphics processing unit (GPU), to achieve hardware accelerated rendering.

Apple has quietly begun introducing a series of frameworks that make developing games for its products easier with OpenGL at bottom.

In iOS 8 Apple introduced "Metal", a low level, low overhead hardware-accelerated 3D graphics Framwork which is a popriatory Framework.Metal is similar to OpenGL ES,but difference is that Metal is not cross platform. Instead, it is designed to be extremely efficient with Apple hardware, offering much improved speed and low overhead access to the GPU, compared to using OpenGL ES. 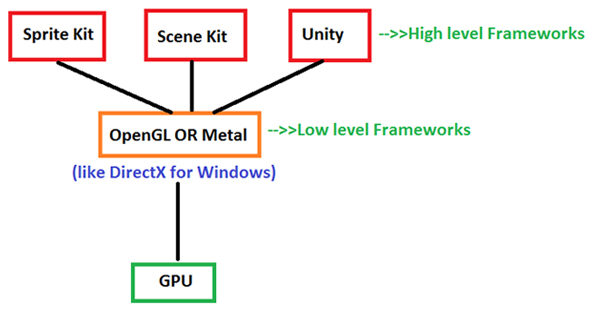 Metal is available for devices using the Apple A7,Apple A8, and Apple A8X chips iPhone 5S, iPad Air, or iPad mini (2nd generation) and its succesors