In this blog, we demystify some of these concepts for you. We will learn the key differences between the two phenomena, and attempt to understand why using a global shutter camera is not enough to eliminate motion blur.

As the name suggests, rolling shutter artifacts are caused by a rolling shutter mechanism in which every row in a frame is exposed at different times during the integration phase. Here, the exposure of consecutive rows starts sequentially. This behavior results in deformations in the output image while capturing moving objects.

For instance, have a look at the below image to understand how the rolling shutter mechanism works.

Since this mechanism results in distortions in the output image, below is how the image of a moving car might look like while captured using a rolling shutter camera:

The below image is a good representation of how the global shutter mechanism works:

If the image of the same moving car is captured using a global shutter camera, this is how it would look like:

As you can see, the image is captured as it is without any distortion.

The solution to eliminate motion blur is reducing the exposure time i.e., increasing shutter speed. This will ensure that the entire frame is exposed only for a short period of time, and the object doesn’t change its position significantly enough to cause motion blur during a single capture. Parameters such as moving speed of the target and distance between the camera and the object need to be considered while determining the shutter speed.

At the same time, if the same moving object is captured using a low exposure time or high shutter speed camera, this is how the output image would look like:

Rolling shutter artifact and motion blur – how they are different

Now that we understand the basics of both the phenomena, let us look at the differences between the two.

Please note that when we say capturing moving objects, the concept we discussed so far would apply for capturing a static target with moving camera as well.

I hope, this blog gave some fruitful insights on the differences between rolling shutter artifact and motion blur, and how to fix them.

If you have any further queries on the topic, please write to camerasolutions@e-consystems.com. 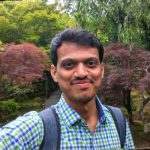 Automatic number plate recognition with e-con…
How Global Shutter Cameras can improve Robotic…
Choosing the right camera solution for smart traffic…
What are Global Shutter and Rolling shutter? How to…
Tweet