Android has gained an enviable market share in the mobile space and is gaining momentum in the tablet market space as well.

From the time Android was bought by Google in 2005, the Open Handset Alliance was announced in 2007, the first Android Smart Phone (T-Mobile G1) in 2008 followed by the Android Market the same year, Android has been making steady progress in the mobile space and has captured the imagination of the mobile user.

In 2011 Google Android made its first major/official deviation from the mobile only approach by coming out with Honeycomb (Android 3.0) that was custom made for the tablet devices. It was an image makeover of sorts. The buzz that Android could potentially come out of its mobile-only approach move on to dominate other verticals in the embedded domain gained more noise and credibility with Google’s foray into the tablet.

As system integrators and product development partners of various product development companies, we at e-con Systems™ (www.e-consystems.com) face questions from OEMs/Product Companiesabout the possibility of using Android on their next embedded product. There is a consistent effort inside e-con Systems™ to follow, study, experiment new technologies like Android and consolidate the knowledge gathered to answer such questions from our customers. We would be sharing this knowledge and our views on the various questions regarding usage of Android for non-mobile embedded systems through this Android Blog.

In the first blog of this series we are discussing, “What are the possible areas Android could move into and why we should track it”

“Google Android” – Yes, Google Android is different from “Android”. Though Android is open source and is under GPL2 and Apache license, without the backing of Google it would have never become what it is today. We are free to use the Android source code in our products (of course abiding by the respective licenses it requires us to follow) but the most attractive features of Android like the Android Market, YouTube, Mail App, Maps and search integration come with the “blessing” of Google.

So if you are a product OEM then you have to get in touch with Google and discuss the licensing of the Google services and pass the Compatibility Test Suite to gain access to the Google goodies in your device. Well this is not as straight forward as it sounds and all of you who had made products would appreciate the “effort” involved in speaking with big companies like Google and the volume that is required to have them take their time and work on our case.

That’s the difference between “Android” and “Google Android”

Google’s Android Strategy and why we should closely monitor it

Having known about the Google Android complexities, there are two different strategies that you can follow as a product developer, considering to use Android for your next product (Note: We are discussing only non-mobile/tablet devices).

Either of these 2 strategies (though opposite in nature) requires us to follow Google’s Android direction closely. We are in need to know how Google is planning to extend Android to non-mobile devices.

In the first strategy, if we need to get Google’s nod for our product, the product vertical should be in the roadmap of Google at some point. If we are not, there is a high possibility that Google may not be ready to support our product idea with Android. You can find examples of this later in the blog..

In the second strategy, if you are going to invest your money to create something new with Android for your next device, you should be aware of Google’s plan as you don’t want them to come your way with their guns blazing and make a void of your investment. For e.g., imagine that you had spent a year or so developing a Tablet friendly version with Android 2.2 and you were planning a release on May 2011. BOOM !! Google comes out with Honeycomb which would be widely accepted because of obvious reasons and kills your tablet optimized Android.

So it pays to understand what Google is planning with Android and guess its direction. That’s just what we did and we are presenting that here. Our approach would be to take a market segment or a particular type of product and analyze Google’s plan for that market. Also we would suggest what approach can be taken if you are considering to build a device for that market and want to use Android.

Before we go into Google’s Android Strategy in detail, let’s take up some time to identify the various embedded systems verticals. Each vertical would have a market, requirements, sales strategy and revenue on its own. The pictorial representation below shows the various embedded verticals and the categories them into broad areas like Communication, Consumer, Industrial & Mission Critical. 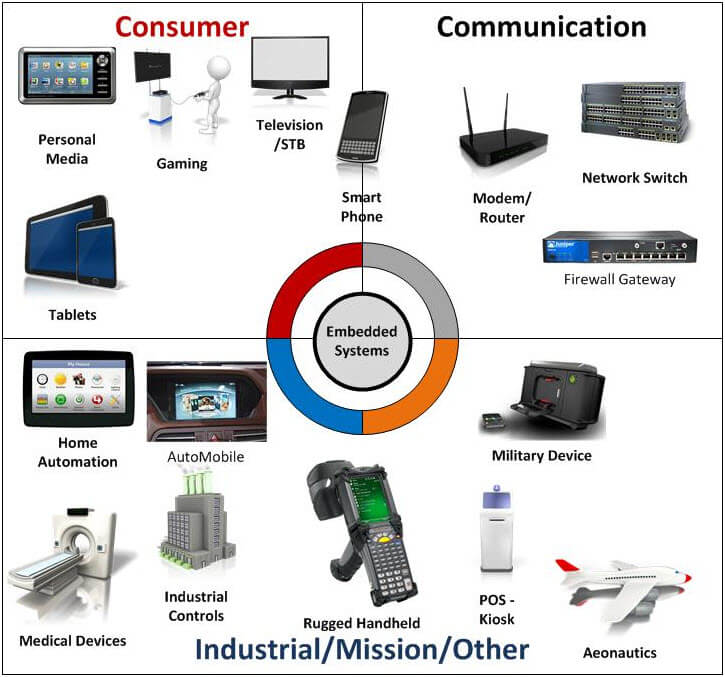 There is a thin line of difference between some of these differentiations. So there is a scope for debate as to what would fall under what (and that’s how the embedded space has grown in the last 10 years). Mobile Internet Devices (MIDs) and Personal Media Players (PMP) are slowly merging into the tablet and the smart phone. We may see no more PMPs and MIDS coming out in some time. The embedded space is pacing so fast that product verticals get created and killed in no time.

I would use the verticals indicated above to discuss Android’s emergence into each one of them.

First let’s discount the areas where Android is not going to be used either by Google or by any other 3rd Party. Most of the devices in the Communications side like the routers, firewalls, switches are going to be off limits for Android. Together with these devices, any HEADLESS device may not require Android in the first place. Most headless devices run Linux, Windows CE or VxWorks. So we would not discuss about these devices any more in this series. 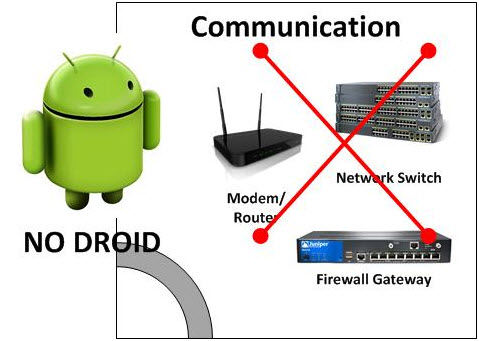 Figure 2:No Android for these devices

Secondly let us consider the area where Android is already prevalent with some devices and may spread with minimum changes and fuss to other devices in the market. Consumer Electronics/Devices is the next vertical/segment where we are going to analyze Android’s influence. My next blog in the series would start addressing that segment.