Win32 is the core API of Microsoft Windows CE. If the operating system supports a feature, it must by definition be supported in Win32. It is portable to a wide range of Windows CE platforms, such as a device driver, using Win32 makes a lot of sense.

Lacking OOP support, Win32 is a function-oriented API. Arcane function names are not the worst of Win32 problems. Of more concern is that the API is prone to memory leaks. The term “memory leak” refers to memory that is allocated but not cleaned up correctly. Memory leaks create problems on all systems, but such problems are emphasized on Windows Mobile devices with their small amount of RAM (compared to desktop systems) and the standard practice of having problems continually running for weeks and months. Under these constraints, memory leaks may cause devices to lock up.

Applications that create certain operating system objects must make sure to also delete these objects or risk leaking memory. Whereas most objects are cleaned up when a process stops, this still creates a problem for processes which must run continuously. Such processes must be carefully crafted and tested to make sure that they are free from memory leaks.

Generally, developers who write managed code do not have to worry about leaking Win32 objects. Microsoft managed libraries do allocate Win32 objects. But the “managed wrappers” are built to make sure that the underlying Win32 objects are cleaned up correctly.​ 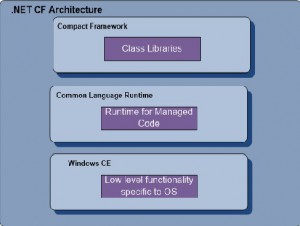 A device requires a reasonable UI with custom UI controls and not expecting a real time UI responses and also a lesser coding efforts. 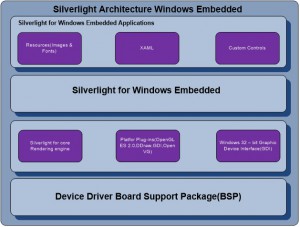 Silverlight for Windows Embedded is a native code (Visual C++) UI development framework for embedded devices and is based on Microsoft Silverlight 3 for the desktop browser. It delivers impressive graphics with optimized performance on embedded devices. The UI framework is designed to build UI shells and core applications for devices and can handle tasks such as events, initializing, and manipulating visual elements, and runs very efficiently on specialized embedded hardware. Hardware acceleration can be utilized if a graphics processing unit (GPU) is available on the device and other requirements are met. With this technology, the UI of an application can be described using XAML, an XML-based language, and can be designed using visual tools like Expression Blend. This allows UI designers to work on embedded devices using the same tools, they use on the desktop and it lets embedded developers concentrate on the core application features and not on the design of the UI.

Devices has GPU support and requires a rich UI (UI with animated controls and effects) with a moderate UI responses.