This article discusses the important tips for Compact 2013 BSP porting.

The following sections explains what should be taken care while porting Compact 2013 BSP from Compact 7 BSP.

The first step in porting WEC7 BSP to WEC2013, need do following changes in WEC2013 BSP.

In WEC 2013 ARM code, we may encounter data alignment error (i.e. alignment fault error).The ARM compiler assumes unaligned access handled in hardware but this is not the case for uncached memory access.

Alignment error will not encounter generally because /QRunaligned -flag is set when compile OS and it will generate code for accessing unaligned memory. The memcpy and memory handle unaligned access.

Example for alignment error: CPU generates data alignment fault for the below give code even when unaligned access enabled.

To avoid data alignment fault, developer should take care of alignment of structure when writing code.
Unaligned access in Boot loader:
o If MMU is not activated, all the memory access is treated as uncached.
o In Boot loader code MMU is not enabled and kernel is not used. Unaligned data access should be taken care by developer. Otherwise often will face data alignment fault exception
o Need to enable unaligned support in boot loader startup code to avoid data fault error.
o Enable unaligned support
 Clearing A bit, bit 1 of CP15 register 1.
 Setting U bit, bit 22 of CP15 register 1
Always verify alignment when accessing memory typically face a problem when accessing unaligned structure passed from hardware.
5.3 ARM Stack Alignment
When working on assembly code in WEC2013 you should keep in mind about stack alignment and keep the stack aligned as four byte boundary or eight byte boundary.

To know more details about the macro’s definition’s refer the link
In all the assembly files (.s) of WEC2013, you have to change ENTRY_END macro as LEAF_END macro. 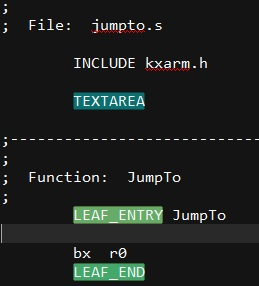 For more details about ARM Thumb2 porting considerations, Please see the below article.

PC arithmetic operation are not supported in THUMB2 mode instructions. So assembler will through an error “pre UAL syntax not allowed” frequently. Need to change few instruction to THUMB2 UAL syntax. Please see the below blog posts for more details.

There are some size constrained binaries specifically pre boot loaders such as XLDR/IPL are loaded by processor boot ROM from NAND/SD card to a small size SRAM and this will load the Eboot to DDR and jump to Eboot. Entry point of the boot loader is expected to be the very first instruction for some processor or a set of predefined data that can be understandable by the boot rom of the processor is expected to be at very beginning of the boot loader. Normally STARTUPTEXT Macro is used to place the required code in the very beginning in Windows CE but there are some changes in this macro on WEC2013 due to these there are some changes has to be done in our code to keep the required instruction/data to be in the first location of the binary. Please see the below blogs for more details.

In WEC2013, DLLENTRY macro is renamed as DLLMAIN. So change the DLL entry point in driver as DLL main and in .def file DllEntry import/export as DllMain.

For example, the following change is required in sources file of drivers.